The Journey is the Reward 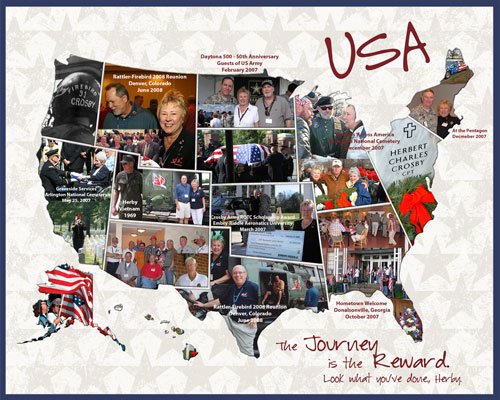 I’ve recently started a very fun endeavor, digital scrapbooking, which I so enjoy doing. I’m working (more like playing) all sorts of projects with this new passion.

Wanted to share my latest “page” with you. This one in particular is a collage of some of the photos taken from various events across the country which I’ve attended that are directly related to my older brother, Firebird 91,Capt. Herbert C. Crosby [KIA 1970] (affectionately known as Herby).

The journey since his interment at Arlington National Cemetery, May 2006, after being MIA in Vietnam since January 1970, has been a priceless reward for me. I have been truly Blessed to have so many people come into my life who have changed it tremendously, and all for the good. Most of these people are Vietnam Veterans, comrades and friends of my brother. Some are still active members of the US Army, some are affiliated in some way with our military, and some are just patriots as you and I of our dear country. All these people have touched my heart and brought my brother back in ways I never thought possible. Thank you all.

I wanted to put together something visual which incorporated all the events Dan and I, my friend Andrea and I, or just I, have attended. Eventually I will write various stories about each event, special meaning, person involved in this new journey. You won’t believe the coincidences of some of the circumstances, better described as Divine Appointments. So much good has come from such a terrible loss of one life. Good, not only to me, but to my family, to new friends, and to complete strangers who are no longer strangers.

This collage is just a small sampling of photos taken at Herby’s funeral services at Arlington National Cemetery (May 2007), the hometown Welcome Home event in Donalsonville, Georgia (October 2007), the Wreaths Across America event at Arlington National Cemetery (December 2007), the awarding of the Crosby Army ROTC Scholarship (February 2008), being invited guests of the US Army at the Daytona 500/50th Anniversary event (February 2008), the Rattler-Firebird Reunion in Denver, Colorado (June 2008). There are a couple photos of Herby from 1969 also.

There are hundred’s of photos which I’m compiling to create scrapbooks from each of the events, but that that’s another day. This journey is such a priceless reward, as it continues.

This entry was posted in Capt. Crosby, Family, Stories and tagged Capt. Crosby. Bookmark the permalink.

4 Responses to The Journey is the Reward