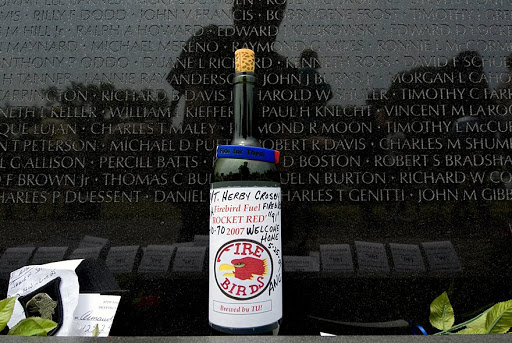 The rest of the story, but first, you must know the beginning of the story…The above photo, taken by Pete Marovich came from an article in the American Journal Magazine titled “Remembering the Fallen” written by Jenny Jones, posted on Friday, Febuary 6, 2009. Pete and Jenny met my friend Julie Hinz of The Rolling Thunder at The Wall in Washington, DC, May 2007, and interviewed her for the article.

The Firebird Fuel was placed at The Wall by Rattlers and Firebirds (from the 71st Assault Helicopter Company, Chu Lai, Vietnam, 1969-1970 era) honoring my brother’s return to American soil and burial at Arlington National Cemetery, May 2007. My brother was Firebird 91 who was listed as MIA Vietnam 1970, along with his crew.

When you click on the above story link just scroll down to you see the above photo and read her input to the article. (But if you go to that link, do come back now, cause you have to read the rest of the story!)

Now, for the rest of the story…
I sent the above information along with the National League of Families POW/MIA Update to my friends and family. Some of these friends are former comrades of my brother, and now friends of mine. One of these men, Vic Bandini, sent this information to me about the Firebird Fuel. I had to share this as it’s great! Thank you Vic (Firebird 99)!

Vic wrote, “This link was sent by the sister of Herby Crosby – Firebird 91 – whose remains were returned to the USA in May 2007. Some of you may remember our journey to Arlington National Cemetery for his funeral over the 2007 Memorial Day weekend.
The wine was a 2007 gag project I created for our small Firebirds group who gather every other April at George Hardeman’s lake retreat in east Georgia. The ‘rocket red’ refers to rockets we fired and the red wine vintage – this year I’m introducing ‘Willy Pete white’ for those who prefer a lighter taste (although by mid-evening at George’s most couldn’t distinguish wine from mogas)……Brewed by Tu – Tu was our hootch maid – about 4 ft tall with a nose wart. A typical day for Tu started with 15 minutes of crying upon her arrival in the Firebirds hootch at Chu Lai. She ususally found the party room a disaster – bottles, beer cans, broken glass, etc. scattered everywhere. Such was the night life of the off-duty Firebirds.
We placed the bottle at The Wall late on the Friday night following Herby’s funeral – we went back the next morning and the bottle was still there (this speaks to the solemnity and respect shown at The Wall – no one vandalizes or removes memoribilia. Unusual for crime ridden metropolitan areas).
Of the four man Firebird 91 crew – CW3 Andy Howes remains unaccounted for to this day.

This entry was posted in Rattlers and Firebirds, Salute, Stories and tagged Firebirds, rocket fuel, The Wall, Vietnam. Bookmark the permalink.