I was honored, and pinned, Sunday, April 28, by the Vietnamese Unforgettable Memories Foundation (VN3NK) from Orlando, at the Rolling Thunder Florida Chapter One monthly meeting. What an unexpected surprise.

It’s a beautiful lapel pin, which I will proudly wear in recognition of my brother, and all the 58,000+ who died in service in Vietnam. 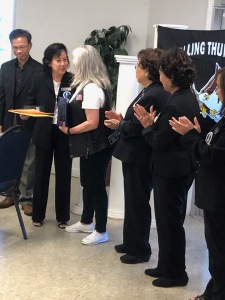 The United States of America Vietnam War Commemoration established the Commemorative Partner Program, an organizationally-based, hometown-centric initiative to assist a grateful nation in thanking and honoring Vietnam veterans and their families where they live. The VN3NK is a registered Commemorative Partner with the Department of Defense, and therefore, officially honors and pins Viet Nam veterans and their families.

Certificates of Honor and lapel pins have been designed to honor and give special recognition to four categories of veterans and their families. One being “In Memory Of” which is the Gold Star version for immediate family members (parents, spouses, siblings, and children) of a veteran who is listed on the Viet Nam Veterans Memorial [The Wall] in Washington, D.C. A form is submitted to the Department of Defense which when approved, a Certificate of Honor and the 50th Anniversary Gold Star pin is sent to the Commemorative Partner (in this case VN3NK) who officially presents it to the recipient.

The VN3NK is very special as their organization is comprised of ladies who escaped the Fall of Saigon in 1975 thanks to our soldiers and veterans. These ladies represent a full circle of what our soldiers were fighting for, freedom.

I remember the words my brother wrote in a letter home on his last birthday, May 30, 1969.

He wrote, “Nobody even said anything about it being Memorial Day. I guess that doesn’t count. All the men that have died over here you’d think somebody would say something about them. It kinda looks like people are ashamed because they died in this war that nobody wants. I don’t see it like that though. We’re fighting and they died for our country and the flag [freedom].

If something happened to me over here, I sure hate to think that people thought I died for no reason. You know what I mean. I’ve got 267 days left today.”

I can tell you all that not only did my brother NOT die in vain, but neither did any other Viet Nam veteran who lost their life in Viet Nam, or at home after service. The VN3NK ladies are living proof no one died in vain, as they have received freedom because of our Viet Nam veterans who saved their lives.

I was so thrilled, and touched deeply to receive this special Certificate of Honor and Gold Star pin from this very special group of ladies. Christina Doa, the founder of VN3NK pinned with me. Her brother served in Viet Nam on our side for the South Vietnamese Army as a helicopter pilot who was shot down in 1968. We have similar brother stories as my brother was also a helicopter pilot who went down in January 1970, MIA 37 years.

It’s truly an honor to know these ladies and their families. I was pleasantly surprised to see them standing in front of the Veterans Memorial Center as I approached the building for the Rolling Thunder meeting. When I saw them I realized why they were there, although I don’t know how they knew I was a Rolling Thunder member. I’ll have to ask. They also brought some delicious Vietnamese appetizers for break time during the meeting. Everyone at the meeting enjoyed meeting these gracious ladies, and their spouses, who were invited to several more local events which I hope they can attend to help spread their grateful thanks to our Viet Nam veterans and families.

The Vietnam 50th Gold Star Lapel Pin just below the Gold Star lapel pin I received on behalf of the President at Herby’s funeral.

There is also a special Blue Star lapel pin and certificate of honor for a deceased Viet Nam Veteran’s surviving spouse. These are of a death of a veteran who served on active duty in the U.S. Armed Forces at any time during the period from November 1, 1955 to May 15, 1975, regardless of location.

If you would like your deserved Vietnam 50th Anniversary Gold Star or Blue Star recognition certificate and pin, please contact the Vietnamese Unforgettable Memories Foundation at their Facebook site. You may also email vn3nk@yahoo.com or call 407.489.2936.