Fabulous day. Rolling Thunder Florida Chapter One (RTFL1) members gathered at Kay’s BBQ in Cocoa for breakfast before heading to the staging area at Eastern Florida State College (EFSC) for the escort. Members of the Vietnamese Unforgettable Memories Foundation (VN3KT) joined our escort too! It was so good to see my new Vietnamese American friends who drove over  from Orlando to partake in this very special escort. 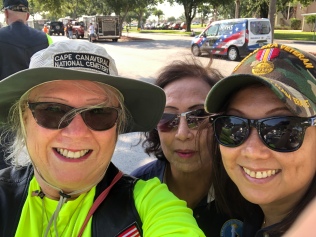 I rode with Charlie Donovan on his beautiful blue Harley trike. I couldn’t believe the amount of bikers from so many different biker groups in the parking lot at EFSC. Everyone was assembled in designated areas waiting for the escort to begin which was around 10 a.m. 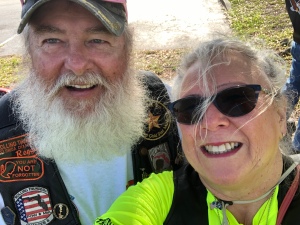 My biker friend Reggie Lord was also there. I met Reggie at the 2010 Ride Home in Andersonville, GA. I rode with him to the National Museum of Prisoners of War at Andersonville National Cemetery. It was a weekend event honoring our Prisoners of War from all wars and the families of our Missing in Action soldiers. He was a former Rolling Thunder member, and avid supporter of everything POW/MIA. He’s the person who got me a ride in the 2017 Rolling Thunder Demonstration Ride, riding with the Gold Star families in Washington, DC. 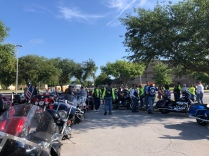 There were hundreds, I’d say more likely  a 1,000+ bikers lined up to escort the Traveling Wall to Wickham Park for the Vietnam and All Wars Veterans Reunion. 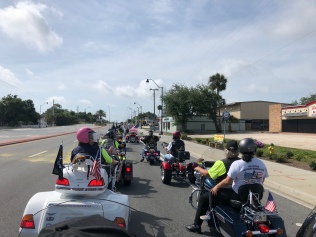 The escort was awesome, truly. The word “awesome” is used so much, but to me, this day was truly an awesome day. Traffic was blocked by local city and county law enforcement all the way on US 1 from the college to Wickham Park. People lined the highway waving American and POW/MIA flags, gesturing the Peace hand sign, waving us on. It was so exciting. 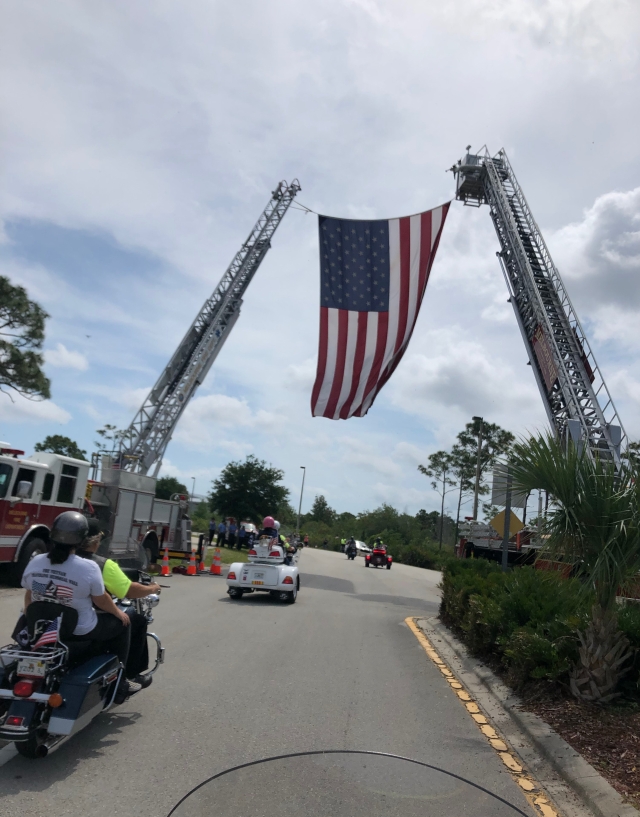 Turning into the park we rode underneath a huge American flag hoisted over the entrance. The escort meandered through the park to the area where the Traveling Wall would be assembled. 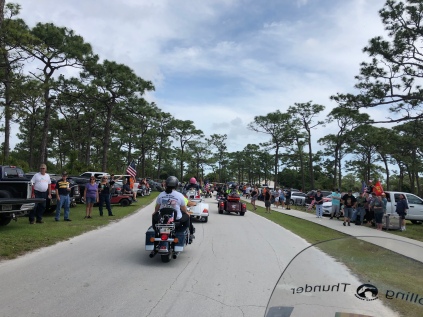 The park was filled with people and campers and RVs all gearing up for the week’s festivities. This is one, if not the largest veteran reunions in the country. As we dismounted the bikes, rested and refreshed I could see the people starting to unload the panels for the Wall. 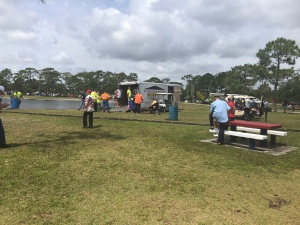 I noticed they were working on the West side of the Wall first…this is the side where Herby’s name, along with the names of Firebird Nine One’s crew, are listed on. He’s on panel 14W [West], line 22. I walked over to get a closer look as it appeared they must be getting close to panel 14, and sure enough, the next one to be installed was Panel 14. I mentioned to one of the guys installing it that my brother’s name is on this panel.  “Would you like to help install this panel?” 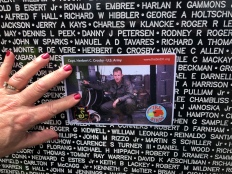 “Yes! I would love to. Thank you!” I was so touched that I got to help install his panel. It made my day. Truly, made my day. I didn’t plan on doing this. Timing just fit into place.

Our escort mission was completed, and my unexpected mission of assisting in installing Panel 14 was completed. I felt satisfied and so happy I decided to do this ride.

As I rode back to Cocoa with J.J. Justice (RTFL1 President) I felt so good about the whole experience. It makes my heart happy to ride with this group of people, the RTFL1, and be a part of setting up the Traveling Wall, especially installing Panel 14W.

I’ll be heading back Saturday, May 11, for the Missing Man Table Ceremony which our RTFL1 Chapter will be hosting. If you’re in the neighborhood do stop by our RTFL1 tent.