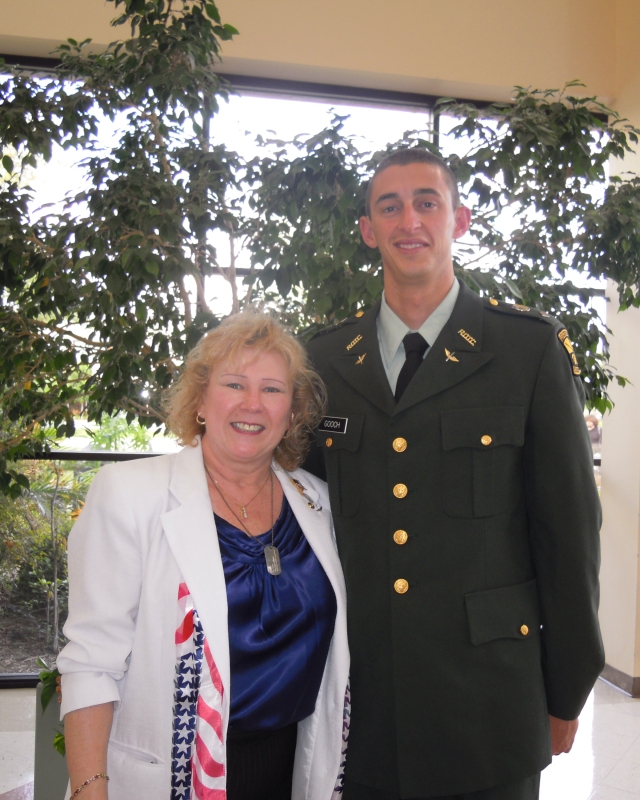 It’s one of the most honored, treasured days of the year for me. It’s the day I get to present the Crosby Army ROTC Scholarship to a young Embry-Riddle Army ROTC Eagle Battalion cadet.

The Eagle Battalion Awards Ceremony is an event in and of itself. There are presenters from various military and civilian organizations present to award plaques, certificates, and appreciations. The Crosby Scholarship is the only one involving money so it’s special, to me and to the recipient.

It was my pleasure to present this year’s scholarship to Frank R Gooch, III. Frank is from Altamonte Springs, Florida. He graduates with a Masters degree in Aeronautical Science and after his commissioning in May he’s headed to flight school at Fort Rucker, Alabama, to pursue his dream of becoming a military pilot.

He follows in the path of my brother who also went to flight school at Fort Rucker (in 1968).

It’s amazing to talk with these young cadets, both men and women dedicated to better their lives by achieving the highest standards in the Army ROTC and committing themselves to excellence in the Army. I salute them all.

I received a touching thank you letter from Frank. He wrote:

“It’s an honor and a privilege to receive this scholarship that honors CPT Crosby. CPT Crosby is a true American hero who gave his life for his country and the defense of our freedom…

…This scholarship has helped me with my school expenses and I sincerely appreciate this very generous gift. I lok forward to following in CPT Crosby’s footsteps and becoming an Army Aviator and serving our great nation. Thank you again! Frank “Bo” Gooch”

All the best to you Frank “Bo” Gooch. May your aviator dreams fly beyond your expectations. It is my honor to know you.