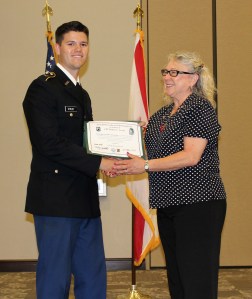 Its always a beautiful day when I get together with the Eagle Battalion to present the Crosby Army ROTC Scholarship to one of these extraordinary young adults. This year was no exception. It was a beautiful, sunny day in Florida, and an even more beautiful group of Eagles.

This is also the 10th anniversary of providing monetary scholarships to an Eagle Battalion Cadet for excellence in military and education training. It’s one of the brightest most treasured times of the year for me. My brother would be in awe, and so proud of these young men and women who go above and beyond to reach their dreams.

I arrived a little early, allowing me time to watch the cadets come to order in the lobby of the Henderson Building on the campus of Embry Riddle Aeronautics University (ERAU). They’re all decked out in their dress blues uniforms looking so handsome, so energetic, and happy.

Some are graduating, moving on to their new commissions across the country to serve for the Armed Forces of our United States. Some are experiencing their first Award Ceremony. 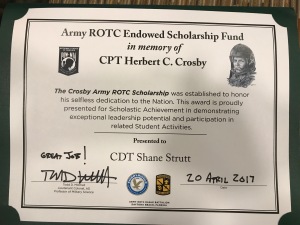 For me this day means so much more than presenting a scholarship. It gives me an annual check-up, so-to-speak. Seeing these young men and women so talented, so eager to do their jobs, to give back to the community and country, well, it instills in my heart that we [our country] will be just fine because of fine young adults who stand before me.

The Crosby Scholarship like a little manna from heaven for one lucky cadet each year. It provides monetary support for them to use as needed. Each year we hope to increase the amount.

This year’s recipient is Cadet Shane Strutt, who was born in Bradenton, Florida. He’s 22 years old and a senior at ERAU. He was in the JROTC at Braden River High School, which had a tremendous effect on his life, along with the passion his family has for the Army, all ultimately pointing him in the direction of the military.

He has excelled in both engineering and ROTC. Shane studies Software Engineering holding a 3.4 GPA. His goal is to commission and branch in either Military Intelligence of the Cyber Corps. He will most certainly excel in either option here, or for that matter, any related career path. 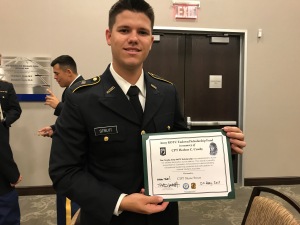 Outside of his schoolwork, Shane enjoys playing sports; he’s a member of the Army ROTC softball, basketball, soccer, and football teams. Hobbies include video games, working out, and eating! He’s an FSU football fan and follows the NFL Tampa Bay Buccaneers and Miami Dolphins (my favorite the Buccaneers).

I have no doubt whatsoever that Cadet Strutt will most certainly accomplish his goals. It was a pleasure to talk with him while enjoying the refreshments after the ceremony. The cadets were studying for their final exams this week, with Commissioning Ceremony approaching next week.

Congratulations and all the best Eagle Battalion. You are all the greatest.

P.S. I had the pleasure to meet up with Cadet Mendoza (last years recipient). He is being commissioned to Fort Carson in Colorado. He is excited not only for that but for his first child, due to this world in December. Congratulations!