My favorite time of the year! Awarding the Crosby Army ROTC Scholarship to a very deserving young cadet at Embry-Riddle in Daytona Beach.

The offiicial award ceremony was Thursday, April 11, however, Cadet Price was participating in an international Ranger Challenge Competition at Sandhurst at the United States Military Academy at West Point so obviously would not be attending the ceremony where all deserving Cadets are awarded various medals and recognitions.

I always enjoy attending the award ceremony each year so I can personally meet and talk with the lucky cadet who is the recipient of the Crosby Scholarship. It makes the presentation so much more meaningful for me, and I hope for the cadet so he or she can really know there is someone behind this monetary scholarship who really cares about them and their mission in life. 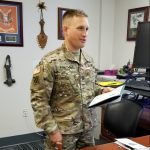 This year’s presentation was held Tuesday, April 16, in the Army ROTC offices with CPT. LG Adam M. Karlewicz presiding over the presentation. I received a bio and photo of the young cadet prior to the event so the minute I walked down the hallway, turned the corner to the main office, I saw this very tall, handsome cadet in his dress blues and all smiles. I knew it was my scholarship recipient immediately.

Outside of school, he is devoted to Army ROTC. He has consistently been ranked within the top five cadets in his class. During his sophomore year he was awarded the Superior Cadet Award in his ROTC class.

In the summer of 2018, Gilbert graduated from the Army Air Assault School at Fort Hood, Texas. Additionally, Cadet Price is a member of the Eagle Battalion Ranger Challenge Team. His second year on the team, he was named the Non-Commissioned Officer in Charge. The team took second place at the annual 6th Brigade Ranger Challenge Competition in 2019, earning them a spot to compete at the international Shandhurst competition at West Point (which is where he was last week).

In the summer of 2019, Cadet Price will attend Advanced Camp at Fort Knox, Kentucky. He will then work at Fort Belvoir, Virigina, as an intern for the Night Vision and Electric Sensor Directorate (NVESD), until he returns for his senior year. He aspires to attend Combat Diver Qualification Course before he graduates, then commission as a U.S. Army Infantry Officer.

Finally, after the military, Gil plans on using his degree to advance and improve technology used overseas to protect our troops.

He’s an amazing young man who I was thrilled to meet. The ceremony was quick as he was in-between classes preparing for finals so sadly, I didn’t get a lot of time to talk with him.

However, when I was talking with him prior the ceremony I asked if he knew yet the amount of the scholarship. He did not, so I told him it was $980.00. I handed him a personal card of gratitude and told him it also had a $20 bill in it as I could not let this go by at $980…it had to be $1,000! The look on his face was priceless, which touched my heart deeply.

I always feel comfort around these young cadets and leave feeling safe that our country is in good hands with cadets from Embry-Riddle’s Army ROTC Eagle Battalion.

And rightfully so as in February 2019, the U.S. Army Cadet Command announced eight winners of the MacArthur Awards for the school year 2017-2018. One being Embry Riddle Aeronautical University, which represents 6th Brigade.

Selected from among the 275 senior Army Reserve Officers’ Training Corps (ROTC) units nationwide, as the top programs in the country.

The awards, presented by Cadet Command and the Gen. Douglas MacArthur Foundation, recognize the ideals of “duty, honor and country” as advocated by MacArthur.

The award is based on a combination of the achievement of the school’s commissioning mission, its cadets’ performance and standing on the command’s National Order of Merit List and its cadet retention rate.

And, what an honor to know and be a part of this amazing group. Thank you Cadet Gilbert Price (Gil) for all you do, all your hard work, and your commitment to fellow man, and country.